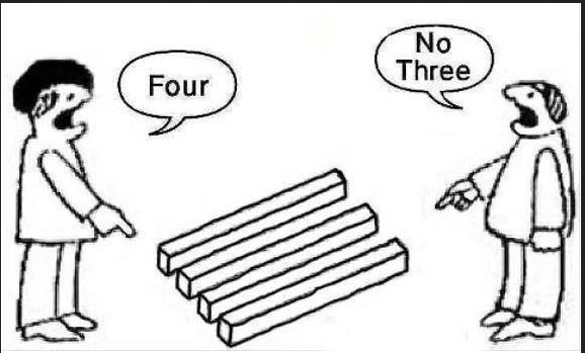 Perspective is a strange thing.  As is its cousin, perception.  The way we see things seems right and true to us – because WE see them.  But what if someone else sees things differently?  Is their perspective wrong? Is their perception misguided?  Or is it simply different?  In some cases, it’s true that one can have misperceptions or a skewed perspective, and this brings to mind the phrase: “There’s three sides to every story – yours, mine, and the truth.”

Consider the image above.  From where they are standing, each person ‘sees’ a different number of logs.  And from where they are standing, the other person is simply wrong.  But what happens if they switch places? What if they put themselves in the other’s shoes? What if they had a different lens through which to view the situation? When your perspective changes, your view on any particular matter could change too.

What other lenses do we use daily to make snap decisions about what we see?  If you see a man in a mis-matched sweat suit standing outside of a CVS, is he just coming from the gym, or is he homeless?  If you see a woman in scrubs on the phone outside the ER, is she a nurse, or is she the on-call surgeon? If you see a man and a woman arguing, who is in the wrong? If you see a kid screaming in the airport and a parent ignoring them, are they a bad parent or is the kid being a brat? If you see flashing lights in your rearview mirror, do you get annoyed, or do you get nervous?

Your perspective informs your perception, and perception is truth.  Based on what you now believe to be true, you behave in a certain way.

When we make these snap decisions based on our perceptions, what actions do we then take?  Do we call the cops on a guy coming from the gym? Do we ask the on-call surgeon to point us to the doctor? Do we take video of the screaming child and go on Facebook and defame the parent who was actually trying to resist giving in to tantrums?

Quick story… Last week I was honored to be a part of a recording for a training video on Transgender sensitivities in the workplace.  The majority of the people in the room were a part of the LGBTQ+ community.  As we were introducing ourselves, I told the room that I represented New Heights ALC, and that my partner, Jackie, was outside but would be coming in soon.  As I made the rounds, I saw two young people smiling and talking to each other.  I assumed they were together. They make a cute couple, I thought to myself.  I was disabused of this notion a short time later when I found out they had just met.  What I had witnessed was them introducing themselves.  But from my perspective, I saw a couple engaged in conversation.

Meanwhile, Jackie comes into the room and we talk about our company and what we do. We answer questions about how we met and came together to form New Heights.  Eventually we all moved into another room to get seated for the recording.  As we are sitting down, I sit on a sofa, and another woman sits on the other end of the sofa.  Jackie comes in last and sits next to me.  It’s a tight squeeze, but it was the last seat available in the room. After a few minutes of chatter, I hear loud laughter from Jackie and Donna, the woman next to her.

Donna had a completely different perspective on the situation.  She’d heard me call Jackie my partner.  Someone else had asked us how we met.  Donna assumed that WE were a couple – and she did so with more contextual evidence than I’d had when I’d made my assumptions about the other pair in the room earlier.  Remember, this was an LGBTQ+ sensitivity training video.  It stood to reason that we might be life partners, from that perspective.  It wasn’t until Jackie mentioned her husband that Donna realized the truth! On top of this, when Jackie squeezed between us, Donna assumed that she did it to prevent her from ‘making a move’ on me.  For a short time, Donna was offended, thinking to herself “nobody’s trying to hit on your girl”.  If Jackie had not mentioned her husband, she would have continued thinking that way.  How would that have affected their potential future interactions?  Would Donna have always had that residual offense on her mind when she talked to Jackie in the future? Would she have allowed that subconscious resentment to affect any potential business dealings?

It’s amazing how one small change in perception can alter an entire relationship.

What I realized on that day, is that ‘what we see’ depends on what lenses we are using when we look.  I saw two young people talking to each other, and because I am a romantic fool I saw them through the lens of “love” and immediately put them in a relationship together.  Simultaneously, because I had said ‘partner’ and not ‘business partner’, Donna had looked at Jackie and me through the lens of ‘couple’ instead of ‘coworkers’.

Can you show empathy?

Going back to the image above, think about what it would take to see something from a different perspective.  Think about how your entire perception of the truth can change, based on the lenses you use to view the situation. As we bring this “All-in August” to a close this week, think about how you can go “All-In” to another’s perspective. Be open to a different view point. Putting yourself in someone else’s shoes is the first step to building empathy.  And it is through empathy that we can build true compassion for our fellow man.