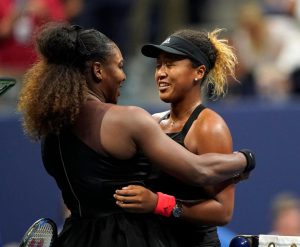 Serena VS The Double Standard

My heart pumped harder in my chest as I watched Serena Williams defend herself. I saw her chest rising and falling rapidly too. I knew it wasn’t because she was winded from playing.  She was in ‘fight or flight’ mode.  I completely understood her struggle to authentically exist in a space that has tried to police her presence for years.

In those tense moments, I felt tremendous pride in her. I admired her for knowing that she fought for herself — and for Naomi Osaka’s future in the sport of tennis. No joy and no comfort comes from choosing to ‘quietly and graciously back down’. Those choices merely uphold the pervasive double standards that still apply to women in every aspect of society.

We know that Naomi Osaka defeated Serena Williams in Osaka’s very first US Open win. That moment was marred by a heated exchange between Serena and the umpire, Carlos Ramos.  Instead of a riveting sports debate on a rising star unseating an indomitable veteran, the media chose to malign Serena’s character. Mainstream and social media described Serena as ‘overly emotional,’ ‘possibly hormonal,’ and ‘disrespectful.’  At least one journalist leveled the accusation that Serena ‘ruined Osaka’s moment’.

The system that reprimands a woman for not “staying in her place” and punishes her for boldly calling out a man ruined it for Osaka and Williams.

For centuries, cultures have celebrated “heroic” men who defended their honor.  Men drew pistols at dawn for duels. Wars were waged and won. And, in tennis, no man received more notoriety and glory for his angry antics than John McEnroe. Even McEnroe admitted he had done way worse on the court and never received the penalties Serena suffered in that match. Other professional tennis players, both male and female, called out the double standard as well.  Despite agreement from many tennis professionals, in the court of public opinion, Serena “had a meltdown.”

Remember, the umpire accused Serena of cheating. Cheating accusations have unsuccessfully followed her career – as evidenced by the excessive drug testing, excoriating critiques of her style and begrudging acceptance of her dominance. Serena defended her honor and was vilified for it.  One Australian cartoonist even drew her in racist caricature – grotesquely exaggerating the beautiful features of African-American women.

These reactions to her righteous anger and self-defense expose our society’s unwillingness to accept women, especially women of color, exercising their agency.  Why deny women the right to defend their character?  In reading the transcript of Serena’s exchange with the umpire, you recognize a woman defending her good reputation:

“I don’t cheat.  I would never cheat. I would rather lose.”

“You question my character…”

“You owe me an apology.”

Watching Serena defend herself made my heart race because I knew what frustrated her about the umpire’s officiating.  Once, as a professional in sales, a business partner accused me of negligence and disrespect. My manager failed to even consider supporting me and immediately censured me. I was forced to apologize for something I didn’t even do. Ultimately, I was right, and the business partner only said those things about me to get negotiation leverage with my company. (Unfortunately, it worked.)  After the one 10-minute conversation where I chose to defend myself, every performance review for the next two years cited my “emotional reaction”.   It soured my opinion of the company and marked the moment I knew I would not retire from there.

If Serena had chosen not to fight, what might the alternative have been?  Her coach admitted to making hand gestures, but he was too far away for her to see them. Even he didn’t think she was paying attention to him. If Serena had ‘graciously accepted’ the censure and backed down, the headlines would have been “Did Serena Williams try to cheat to win?”  or “Williams caught cheating in a desperate attempt…” It could have eroded 20 years of the reputation she has fought ceaselessly to build.

Despite enduring decades of mistreatment from the tennis community, she has worked her way to the top of her game.  After waging her life or death battle with blood clots to return to the tournament, her integrity was again called into question. She did what any veteran player protecting a legacy would do. What John McEnroe, Joe Namath, Michael Jordan, or LeBron James would have done.

However, this is not the only double standard. Lebron James can throw a tantrum during a game, but if he speaks about social injustices, commentators tell him to “shut up and dribble.” When Serena fights for fair treatment on the court, they attack her behavior because they cannot attack her reason. Serena knows she fights not only for herself but for the future of women like her opponent Naomi Osaka.  Serena stated: “It may not have worked out for me, but it will work out for the next woman.” She’s talking about women in her profession having the same freedom to express their passion for the game – the same freedom to get angry when a situation merits anger.  Men get away with yelling, cursing and physically confronting each other. People describe them as “take no prisoners” leaders. Women who merely interrupt a male coworker to get a meeting back on track are “hard to work with,” “bossy” and “intimidating.”

Take a step back from this moment. It was never about Serena’s behavior. It was how men and women reacted to it.  One of the most insidious and pervasive biases in the workplace insists that women not ‘talk that way.’  I challenge women to defend their integrity.  As your heart starts to race, you may want to ‘graciously back down’.  Be willing to challenge the double standard. Demand that more men speak out and denounce toxic, gender-based stereotypes. Women deserve to valiantly duel like gladiators in defending our good name.

If you are a leader of people, or hold a position of authority, before you rush to judge someone for acting ‘out of character’, STOP.  Think about how many microaggressions and how much marginalization that person has dealt with over a lifetime.  Think about what brought them to a place where they are willing to ‘die on this hill’. Ask yourself if you are about to censure an irate individual, or quell the spirit of a person standing up for themselves.  Have empathy for their position – what would YOU do?  Don’t replace that with what you want them to do to make you comfortable, think about what you would do if you were faced with the same choice: fight or flight.